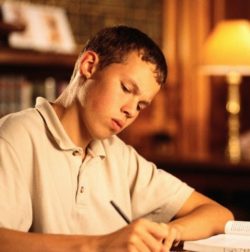 Online Videos Coach You to
Learn Faster and
Remember Longer

Watch one video each week for four weeks and use the methods as you do your regular homework assignments. If you use these methods for one month, you will:

“Before, I would usually cram before a test, which didn’t work. Now, I practice as I go, often reviewing worksheets and problems.”

Free Sample Lesson
Try it out!
Does it work for you?

“Practicing to mastery is working for me. I have spent less time on my homework assignments and have been doing them efficiently and correctly.”

Many students don’t think they can do better in school and don’t know how except maybe by studying 24 hours a day. The Power Learners Method helps with issues like these.

The Power Learners Method is likely to improve your grades and your opinion of yourself.

What You Will Learn

Try it for a month. You will see that these techniques work. Success is motivating and fun.

Free Sample Lesson
Try it out
Does it work for you?

No one ever became good at anything without practicing. Learning is a change in your brain that enables you to do something you couldn’t do before. You cause those changes by doing what you are learning to do. In school, at a minimum, you must learn to answer questions and solve problems on tests. So, that is exactly how you should practice. Teachers, books and videos get you started by explaining and demonstrating how to learn. Then you become good at it by practicing.

How much practice should you do? Enough to get an A if there were a test tomorrow. You might think that you haven’t time to do that. You might barely be keeping up now. But, even though mastering today’s lesson takes a little longer than just getting it done, knowing today’s lesson will save you even more time on future assignments. In addition, success in learning feels good and is motivating.

If You Are Stuck, Get Help

So long as you are making progress, persevere. But when you are stuck, get help as soon as possible. You might call or text a relative, classmate, or teacher; or turn to the Internet. Once you get the help, continue practicing to mastery.

To Remember, Re-practice to Mastery

Practice strengthens the connections in your brain, which takes days. So, for long-term remembering, re-practice to mastery on two more days in the next week.

What Students and Parents Say

The free App helps you use the Power Learners Method to study, do your homework, and master your subjects.

The Power Learners App guides you in creating a step-by-step learning plan for each assignment in about a minute. These plans help you overcome procrastination, get started, stay focused, and master the lesson.

As with any student planner, you start by writing down your assignments. Here is what’s different.

Before you start a homework assignment, the app will prompt you to:

Then practice until you could get an A if there were a test tomorrow. 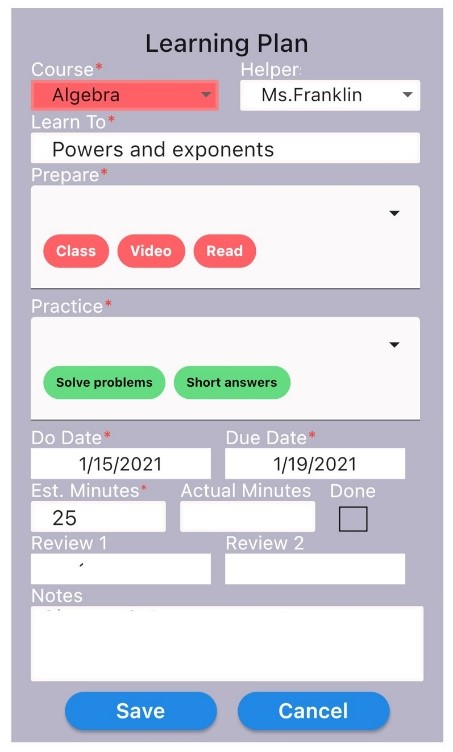 Will the Power Learners Online Video Course Work for You?

Based on our experience helping hundreds of thousands of teens and young adults learn many different subjects, the answer is a definite YES! The research shows that over 90% of teens can master their high school subjects in four years. The key is doing enough practice to master your lessons, one after the other. The amount of practice you need may be more or less than others, but the good news is this. As you progress in your courses, your learning rate increases. With the Power Learners Method, school becomes easier for you. You are likely to get better grades with less time and effort than you spend now.

We surveyed 1119 students one semester after they attended an in-person Power Learners workshop.  93% reported lasting improvements in 3 or more of such outcomes as:

Houghton-Mifflin-Harcourt published our materials as the Learning Power textbook, which has been used in over 400 high schools nationwide.

Dan told us he thought our course would help him in future classes, but he didn’t intend to go to college. “It just isn’t my thing.” Then, one of our coaches asked him, “What are you good at?” Without hesitation, Dan said, “Baseball.”  He played Little League, always made the All-Star teams, and was on his high school team. The coach asked Dan whether he had practiced more, hit more pitches, or fielded more grounders. Dan said, “No. Baseball just came naturally to me.” After a moment, he continued,  “Wait. The summer I was 15, I decided to learn to throw a curveball. I started practicing every day, but I wasn’t getting better. I was thinking of giving up, but I decided to practice until I could do it or my arm fell off. Well, by the end of the summer, I could throw a curve.” He paused. Then he added, “I’ve decided to go to college.”

The moral of this story? Everybody knows that to learn piano,  a sport or dancing you must practice. But when it comes to school, some students don’t focus on practicing. They start worrying instead whether they have the IQ or natural talent to learn some subjects. With worries about our capabilities, it is natural to get discouraged. Success is always motivating. Failure is sometimes motivating, but more often, it is defeating.

Two years ago, we surveyed 219 college faculty and counselors working with struggling students at 30 colleges. An overwhelming 205 of them estimated that fewer than 10% of their students are aware that active practice—answering, solving, explaining, and applying—is the most effective way to learn new things.

To see how the course works, please take our free sample lesson. In about 10 minutes, you can prove to yourself that the Power Learners Method will work for you.

Parents: Take the sample lesson yourself. It will help you talk to your teen about school and this video course.

Free Sample Lesson
Try it out
Does it work for you?
Copyright 2023 © Power Learners
Tiburon CA